Compliments for the organizers of the Prognosfruit 2022 conference in Belgrade 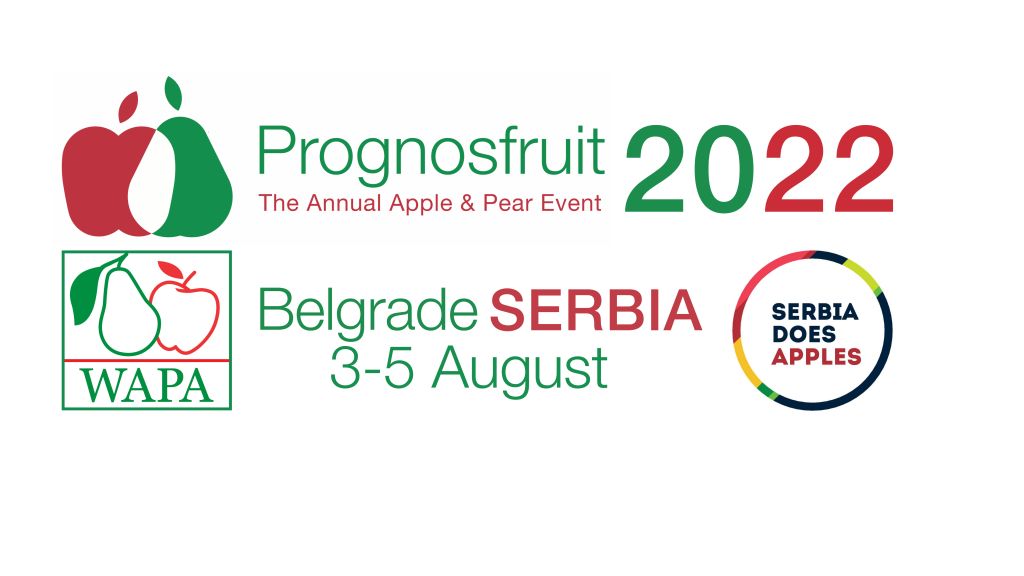 “Best Prognosfruit ever!” was one of the messages that the organizers of this year’s Prognosfruit 2022 received. And one of the organizers of this event, our Association Serbia Does Apples (SDA), has many reasons to receive such messages, because other participants, and there were more than 200 of them from 23 countries, share a similar opinion. According to them, the Prognosfruit 2022 conference held in Belgrade highly raised the bar for colleagues in Italy, who will organize the conference next year.

Along with Serbia Does Apples, the organizers of the Prognosfruit 2022 conference are the World Apple and Pear Association (WAPA), with the support of USAID’s Competitive Economy Project, Agrofresh, and other international and domestic sponsors.

The common conclusion of those who spoke at Prognosfruit 2022 is that the production of apples and pears in the countries of the European Union continues to have a growing trend, but outside the EU, as well as in China and the USA, that trend is declining. That is why it is important to stimulate the consumption of apples and pears and focus on new markets.

“We need to work on affirming the consumption of apples through new products and flavours. There are more and more varieties of apples, but producers need to know who the consumers are. In the north of Europe, certain varieties are in demand, and in the east of Europe completely different varieties,” says Luc Vanoirbeek from Prognosfruit and the European farmers’ association COPA/COGEKA.

He adds that the quality of the crop should also be improved, because Europe has been affected by several droughts, and technology can help a lot here.

Dominic Wozniak, president of WAPA, concluded: “The outlook for the upcoming season is positive, although the sector will need to be prepared to face various challenges, including significant increases in costs affecting the sector’s competitiveness, intense weather conditions, logistical issues, inflation and difficulties in securing seasonal workers. The ultimate goal is to increase consumption, thanks to the quality of the produced fruit, and to reverse the previously negative trend”.

Philippe Binard, General Secretary of WAPA added: “It is estimated that the pear crop in the EU in 2022 will increase by 20% compared to last year, when we had a record low crop, by 5% compared to the three-year average. Production rose to 2,077,000 tonnes, mainly as Italy and France doubled their production compared to 2021. However, the yield remains below its full potential.”

Senad Mahmutović, State Secretary of the Ministry of Agriculture, Forestry and Water Management of the Republic of Serbia, spoke about the support of state institutions to the fruit production sector: “We are proud that our apples are on the markets from Saudi Arabia through the countries of the European Union, the Russian Federation, and Egypt. Circumstances demand that things change, not only in the manufacturing sector but also in trade. To support these sectors, it is up to the state to open new doors based on friendships and to use these opportunities for the benefit of producers and Serbia.”

Danny Robertson, director of the USAID mission in Serbia, said: “As many of you know, Serbia’s agribusiness sector has developed rapidly over the past decade, especially in the fruit sector, thanks in large part to investments in high-tech orchards and improvements in the logistics infrastructure. I am proud to say that the United States Agency for International Development (USAID) has invested heavily here to support that transformation.”

In the opening address at the conference, on behalf of Serbia Does Apples, the president of the association, Gojko Zagorac, addressed the audience: “It is a great honor and pleasure for us to host the Prognosfruit 2022 conference this year, and thanks to the fact that Serbia Does Apples has been a member of the World apple and pear association – WAPA. This is the most important international event in the apple and pear industry, which brings together professionals from the industry, from all over the world. The conference is an excellent opportunity to present the economy of Serbia to the world, promote our producers and establish new international contacts.”

Julka Toskić, project manager of the association Serbia Does Apples, spoke about domestic apples in her presentation at the conference. She stated that the quality of the apples produced in Serbia is excellent because the apples are produced using modern technology, which brings high yields, as well as a high percentage of the first class, with varieties that are in demand on the world market, with the introduction of numerous quality standards that guarantee health safety and correctness of produced apples.

“Modern production allows manufacturers to have lower production costs, so they can be competitive on the international market. This is not the case with the old extensive apple orchards, the yields there are much lower, and I believe that over time the old orchards will be replaced by modern ones, with a large number of seedlings per hectare, watering and feeding systems, anti-hail nets and frost protection systems,” says Toskic.

The participants of Prognosfruit 2022 had the opportunity to see a modern orchard in Serbia, on the third day of the conference, during a visit to the orchard of the company Atos Fructum, a member of the association Serbia Does Apples, on the southern slopes of Fruška Gora. The company produces some of the highest quality domestic apples and in recent years has been successful in diversifying export markets for Serbian apples.

Next year, the Prognosfruit conference will be held in Trento, Italy.

Prognosfruit, the leading annual event for the apple and pear sector, will take place in...

Thanks to the cooperation of Serbia Does Apples Association and Organization for Food and Agriculture...

Representative of Serbia Does Apples Association, participated at trade mission to Sweden which was organized...